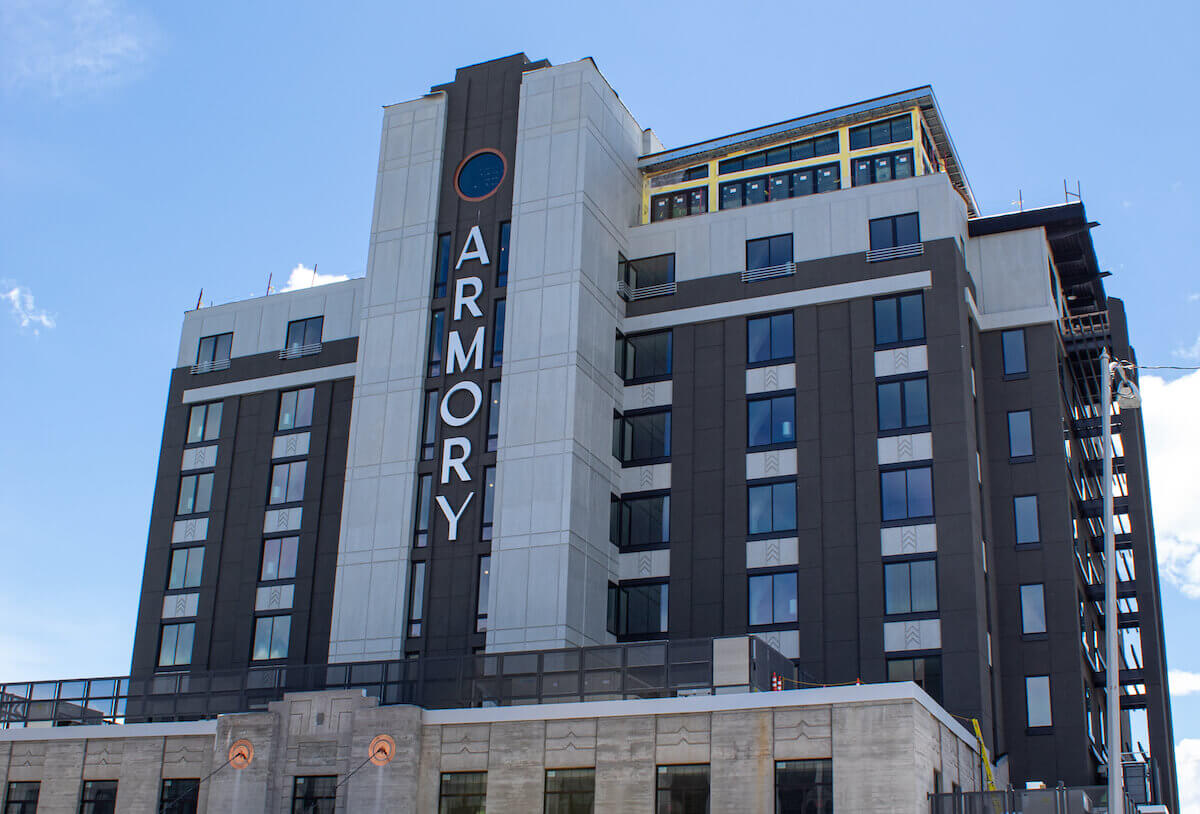 We have many construction projects across Montana. One of our favorites? The Armory Hotel in downtown Bozeman.

After several years of planning and construction, this project nearly complete. The Armory Hotel combines Bozeman’s past with its future, turning the historic Bozeman Armory into the entrance for a 100,000 square-foot, 122-room hotel. Keep reading to learn about the armory’s rich history in Bozeman, and see its transformation into the tallest building in Bozeman.

The National Guard Armory in Bozeman is on the National Register of Historic Places. Architect Fred Willson designed it way back in 1941, using a classic Art Deco style. Made in response to the attack on Pearl Harbor, it had a rifle range, a soundproof room, and thick floors capable of accommodating military trucks.

Over the ensuing years, the armory became an important social meeting place for the young and old alike. Ken Williams even has a fun bit of personal history with the Bozeman Armory. Believe it or not, it was the site of his high school prom.

After years of general disuse, the state sold the Bozeman Armory to the city of Bozeman in 2003. The immediate goal was to sell it for commercial development. However, the 2008 Recession delayed these plans for a few more years.

The city of Bozeman finally approved construction on the Bozeman Armory in 2013. After several redesigns and re-bids on the project, we finally started work on the project in May of 2018. Later that same year, a flag raising ceremony formally announced to Bozeman that changes were coming.

Construction has included eight stories, a pool on the rooftop, and a mechanical room in the original armory building. It hasn’t stopped there. We’ve also helped add a signature restaurant, a whiskey and bar-centric speakeasy, and 8,000 square feet of meeting and event space. And to honor Fred Willson’s original vision, the hotel features an Art Deco style.

Now, just weeks from reopening, the historic Bozeman Armory is a foundational part of the tallest building in Bozeman — surpassing the height of the Baxter building. Continue scrolling to see pictures of the progress.

Without a doubt, this town is booming. And over the years we’ve played a major part in Bozeman’s growth. We’re proud of the Armory Hotel, in addition to all of the hospitality projects we’ve worked on. But our work goes far beyond hotels: we want to build communities. Our projects range from hospitals to schools to roads to affordable housing. Bozeman has been our home for forty years, and we are committed to a future of smart, sustainable growth.

But back to the Armory Hotel: with its bars and restaurants and entertainment, it should be an attraction for the entire community — visitors and locals alike. In this way, it will carry on the legacy of the Bozeman Armory: bringing people together.