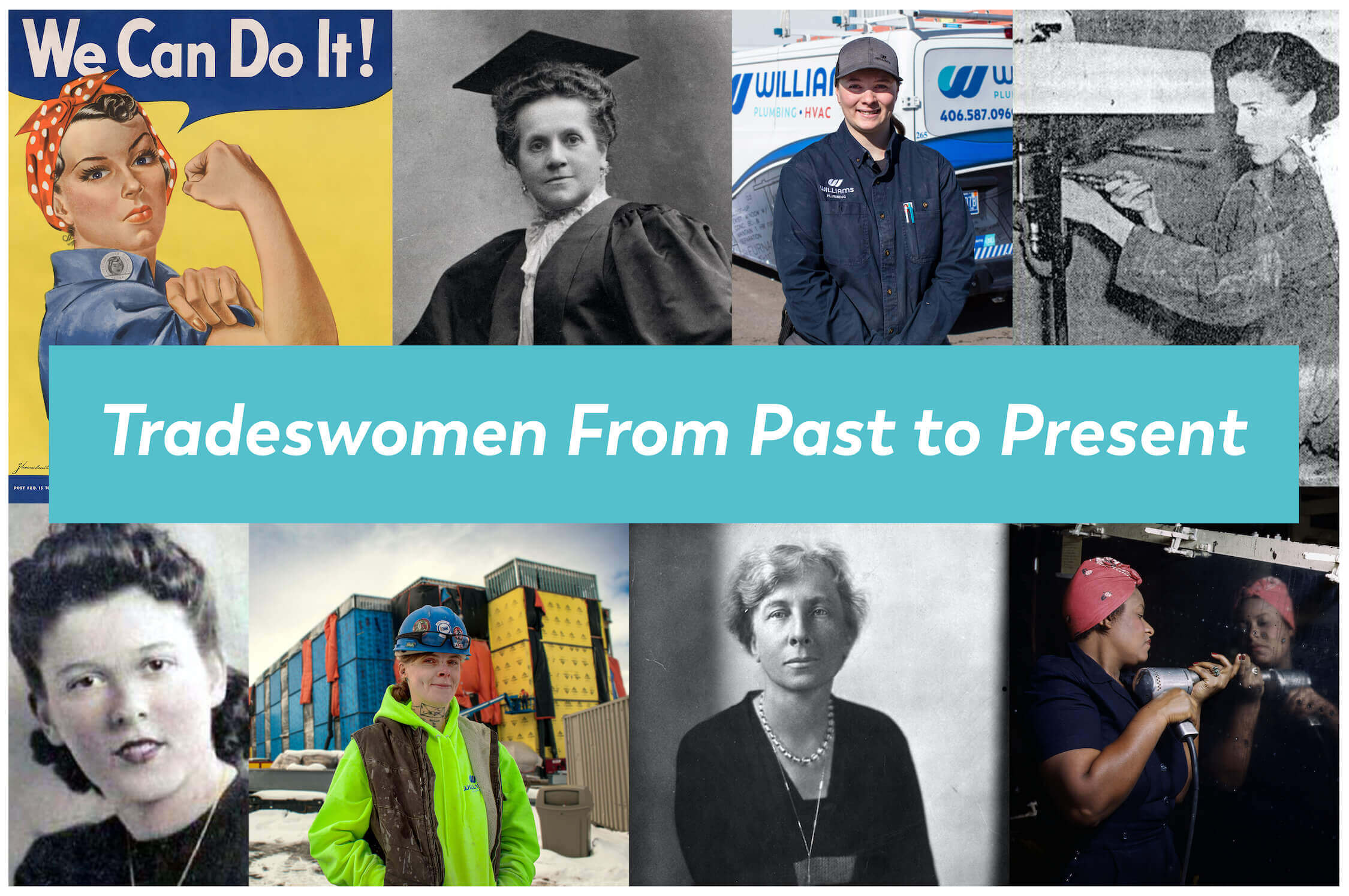 In the spirit of Women’s History Month, let’s take break from plumbing/HVAC advice and tech news to give a brief history lesson. The trades have a long and rich history, but women’s role in these careers is largely underrepresented — and underreported. Yet the truth is that women have played a major historical part in our industry, from construction to plumbing to HVAC and beyond. So continue reading to learn about tradeswomen from past to present — as well as a look into the future for women in the trades.

The history of women working in the trades goes back centuries. Many ancient structures are thought to be least partially built by women, despite their role being diminished or completely unacknowledged at the time. In the Middle Ages, where historical records tell a slightly clearer story, many women held down jobs as construction laborers, tilers, and masons. Among them, a 13th-century stonemason by the name of Sabina von Steinbach made, according to legend, notable contributions to the Strasbourg Cathedral.

It wasn’t until 1872, however, when Emily Roebling became one of the first women to hold a major role in a construction project — and to be widely acknowledged for it. The project was no less than one of history’s greatest triumphs of engineering: the Brooklyn Bridge. Her rise as the “first woman field engineer” was, in many ways, an accident. Her father-in-law, the original designer of the Brooklyn Bridge, died of tetanus; three years later, her husband, who had taken over the project, became bedridden. Emily’s keen knowledge of building materials and cable construction, along with her tireless dedication, made her indispensable. The Brooklyn Bridge opened eleven years later — and Emily was the very first to cross it.

Entering the 20th century, things start to get heated. In 1919, U.S. Patent No. US132590A was issued to an African-American woman named Alice H. Parker. Her invention? The residential natural gas furnace. Her furnace — which functioned without the use of coal or wood — was a critical precursor to modern central heating systems.

Then came more engineering firsts. Lillian Gilbreth, known as the “Mother of Industrial Engineering,” was highly influential in her field. Her inventions — including the electric food mixer and the foot-pedal trash can — are still used today. In 1951, she was the first woman to earn a Ph.D. in engineering and was the first honorary member of the Society of Women Engineers.

Breakthroughs for women in the trades weren’t limited to engineering. In 1951, Lillian Ann Baumbach passed her Virgina plumbing exam to become the first female Master Plumber. Though the media’s reactions to her accomplishment were as focused on her looks as her skillset — headlines led with phrases like “Pretty Plumber” or “Cutest Master Plumber” — Lillian’s sudden fame brought attention to women in the plumbing trade.

But it was Rosie who made the biggest impact on a generation of women in the workforce.

When we think of tradeswomen from the past, Rosie the Riveter — the flexing, handkerchief-headed icon of the World War II era — comes quickly to mind. In the 1940s, wartime efforts pushed women workers to the forefront of the American economy, as millions of “Rosies” reported to factories and shipyards to build bomber planes and warships. These women did more than rivet: they welded, they assembled, and they operated heavy machines. In less than five years, the percentage of women in the American workforce grew from 27 to nearly 37 percent. It was a watershed moment for women in the workforce.

However, after the war, a vast majority of the women who led the wartime industrial efforts returned to their pre-war lives — not all of them willingly. Many of the factory and shipyard jobs that women held for half a decade were taken by men returning from the war. The “Rosie” zeitgeist, however, demonstrated to a whole generation of women that they could thrive in the workforce — including the trades — if given the opportunity.

Today, the U.S. Bureau of Labor Statistics tells a story that is both new and familiar. Although women’s participation in the trades has grown since the 1950s, women today make up less than 10 percent of the construction industry. Among plumbers, pipefitters, and steamfitters, that number shrinks to less than 2 percent. There remains a stigma about female plumbers, which limits what women might consider possible for a career. However, the exceptions to this narrative — the tradeswomen across construction, maintenance, and manufacturing industries — are helping redefine what a viable career looks like for a woman in 2020.

Meet Elizabeth Carpenter. She has been an Apprentice Plumber at Williams for the past two years. You can find her working hard on our job site of the new Bozeman Health ICU. The trades run in her family: her sister recently joined our Billings team as a laborer.

Meet Aurora Anderson. She is new to the trades, having joined Williams just six months ago in the HVAC service department. Aurora didn’t grow up thinking she’d be pursuing this line of work — but her dad, who works for Bozeman Water and Sewer, encouraged her to consider a career in the trades. Her experience so far? It’s been great. Customers are often surprised to see a woman in this line of work, but the entire HVAC team has been supportive and helpful. Her goal? To get a van of her own, and prove she can service HVAC with the best of them.

The outlook for the trades is promising. HVAC mechanics can expect a 13 percent job growth through 2028, with the number for plumbers a notch higher, at 14 percent. We already explored the great career opportunities for heavy equipment operators in another article. In general, the next decade gives us reason to believe that these industries will only continue to get better.

But what about for women? It’s a good question — and one that every leader in the trades should take seriously.

These stable, well-paying careers are, in the abstract, equally available to women. However, a general lack of education and support in the trades for women has contributed to the slow growth in the labor statistics mentioned above. Many are trying to change that. From small, local programs like GRIT (Girls Representing in Trades) in Missoula to national organizations like The National Association of Women in Construction (NAWIC), tradeswomen support and advocacy continues to spread.

Looking into the years ahead, the number of women in the trades is likely to grow — and their roles in this exciting, historically rich set of careers should continue to gain prominence. Here’s to all the tradeswomen helping build our communities from the ground up.