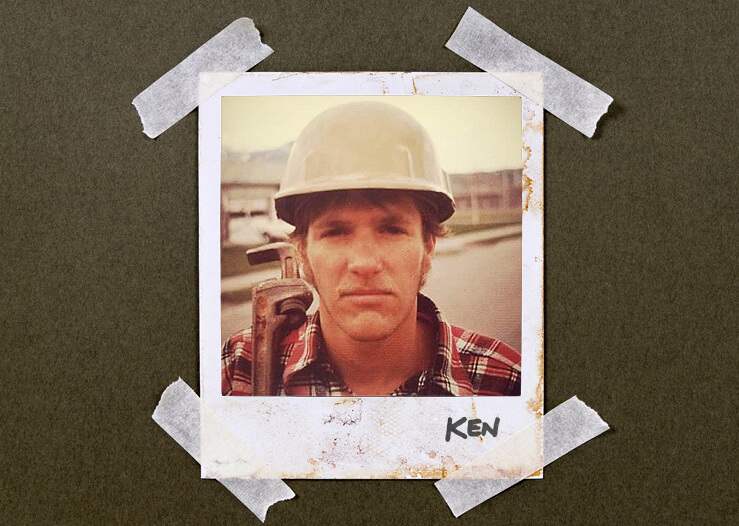 This year, Williams Plumbing celebrates 40 years of business in the Gallatin Valley. These days, we offer more than quality plumbing: we also provide civil construction, HVAC, and green energy solutions to Bozeman, Billings, and beyond.

But it didn’t start that way.

This is the history of where we came from and how we got to where we are today.

Ken Williams, a second-generation plumber, has a plan. Having grown up in the Gallatin Valley, he wants to serve his community with the trade he’s been mastering since he was 15. Before the calendar flips to 1980, he founds Williams Plumbing. The company is small — Ken is the one and only employee — but he is motivated. 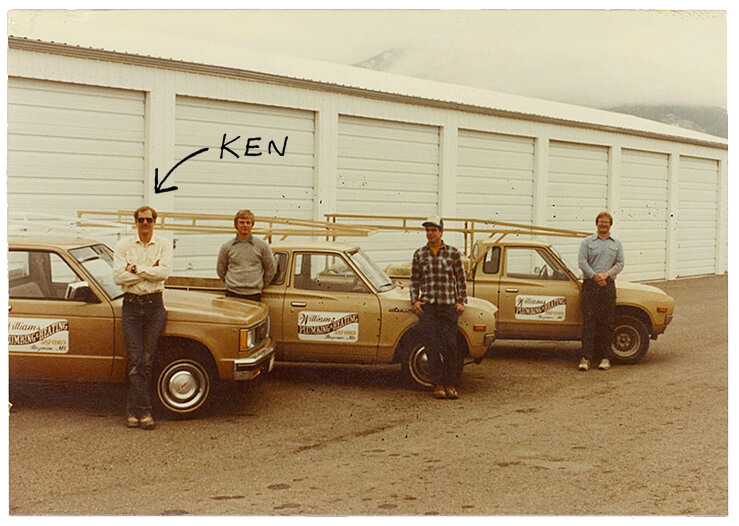 Welcome to the eighties. Ronald Reagan is now president. Western Montana is blanketed with ash from Mount St. Helens. The personal computer is the new way of doing business.

Meanwhile, Ken is busy. Though Williams Plumbing began as a one-man operation, it doesn’t stay that way for long. The young business owner sets out to grow his company with a simple adage in mind: catch people doing things right. Within months, he catches a lot of people doings things right — and these folks become his first employees.

Forming a new company is hard; building a meaningful culture is harder. As Ken forms a collective vision with his fellow plumbers, three key principles emerge: 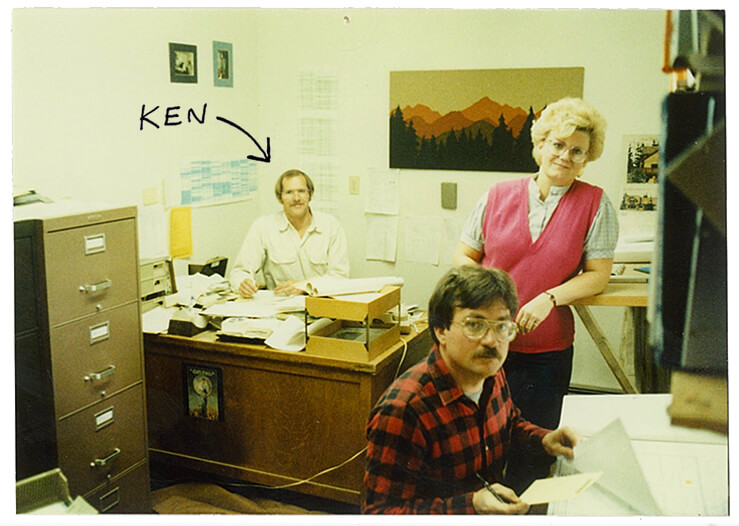 Backed by these principles, Willams Plumbing’s reputation of fair and quality service helps establish them as a top plumbing contractor in the Gallatin Valley.

By 1984, Ken realizes the company is ready to take a major step forward. He incorporates the business, ensuring Williams Plumbing is in a position to grow with its expanding workforce and customer base well into the future.

There’s another incentive for becoming a corporation, though it won’t become clear for several years. The Williams Plumbing legacy can now continue in perpetuity under the family name.

On a chilly Wednesday in March, Quin Williams is born. This bouncing baby boy will — one day — grow to become an essential part of the Williams vision. But we’ll get to that.

By the middle of the new decade, Williams Plumbing has grown so integral to the Montana community that new industry opportunities emerge: construction and heating. In 1995, the company establishes Williams Civil Construction, and major building contracts soon follow. Williams Heating forms two years later, becoming a go-to resource for commercial and residential properties across Western Montana.

Having grown from a one-man band to a three-trade company, Ken is witnessing Williams exceed even his own expectations.

It’s the 2000s. We survived Y2K in one piece. George Bush Jr. is now president. The fast-paced world of the Internet is the new way of doing business.

And through the heart of this decade, Williams is flourishing.

Its workforce has swelled to over 350 employees, a 35,000% (!) increase from 1979. Plumbers, HVAC technicians, foremen, engineers — the list goes on, and the jobs keep coming. The Williams fleet, with its increasingly familiar white vans and trucks, can be seen all over Bozeman and western half of the state. It doesn’t stop there. Williams Civil Construction has its work gloves on seemingly every building project in town. In 2006 alone, the Civil team secures $16 million in bonding. 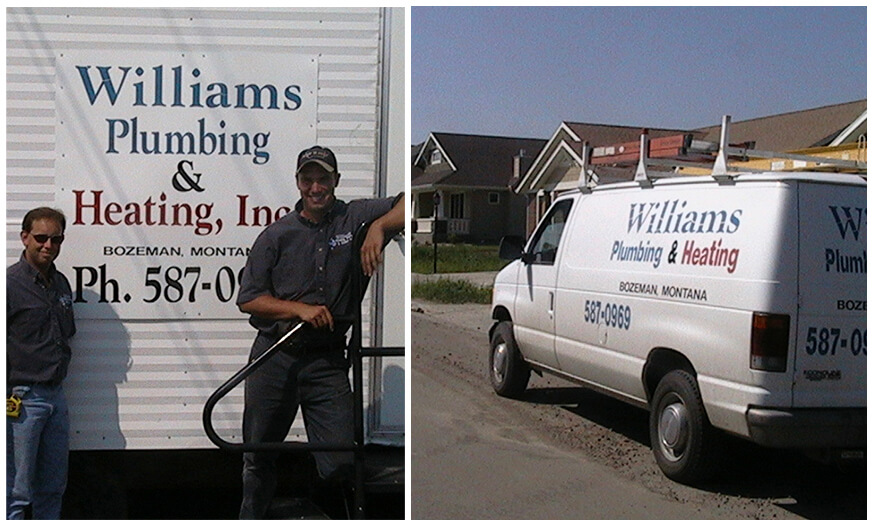 But that’s not all. Williams also has a new Vice President: a young man by the name of Quin Williams. He’s worked for it. After starting out as a file clerk, he’s turned a plumbing apprenticeship into a Master Plumber’s License — just like his father — becoming one of the youngest in the state of Montana to do so. His intuitive grasp of new technology and business practices help take the company to new heights, earning him a seat in the executive offices.

These are the boom times. But no one is able to predict what’s about to happen next.

The Great Recession rocks the foundation of the world’s economy — the trades industry isn’t spared.

As the U.S. market flounders, Williams experiences its biggest challenge yet. Montana’s economy, which had been growing steadily for the past few decades, skids to a halt. New commercial and residential contracts become scarce. Tradespeople across the northwest are facing unemployment. Williams stands tough, but the team is forced to shrink their workforce in order to stay on their feet. Construction projects bottom out: in 2008, bonding dollars plummet to zero.

There’s no way to sugarcoat it: the entire industry has been hit hard.

With the decade is coming to a close and a new one about to begin, the Williams team is prepared to make bold moves.

In 2009, Williams Civil Construction is fully incorporated as its own company. This decision proves prescient. The Bakken Boom — the massively successful oil industry in North Dakota — leads to opportunities across the trades industry. In 2010, Williams secures its first project out of state: a building project in North Dakota.

Once again, it’s a new era. Virtual Reality is now a thing. Everyone’s talking about bitcoin. Barack Obama is president. Digital and mobile technologies is the new way of doing business.

In the years that follow, the entire Williams team returns to form. Commercial and residential contracts come out of the woodwork, and the fleet of Williams vans and trucks is buzzing all over town. It gets better. In 2014, Williams Civil Construction secures its largest ever project at $13 million. A year later, Williams Plumbing does even better, with a project of $16 million.

The rebound continues. In 2015, seven years after securing no new bonding, Williams secures $40 million in surety. And after bottoming out at 60 employees, the company recovers its workforce to well over 200.

Together, Quin and Ken push to adopt new, cutting-edge technologies such as BIM and VDC, placing Williams at the forefront of their industry. 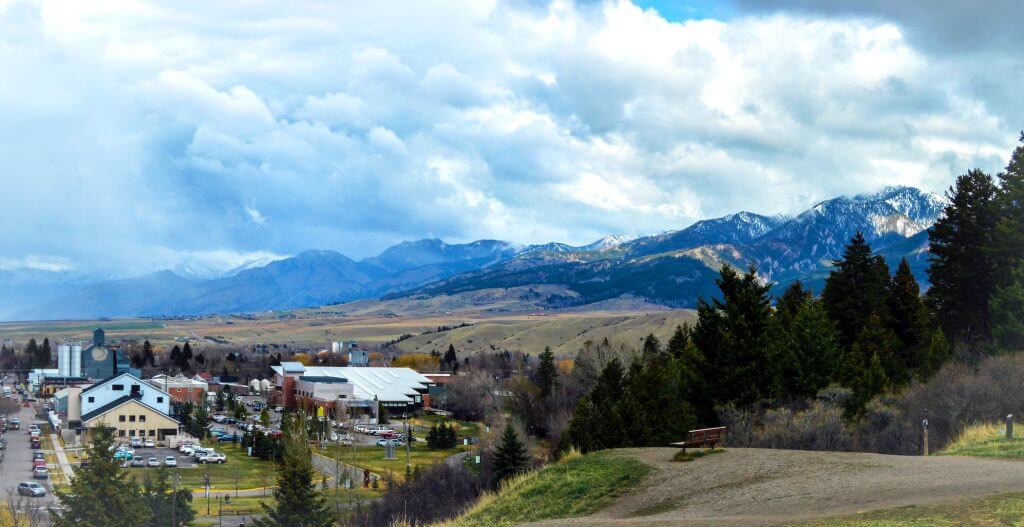 The year is 2020. So much has happened, and there’s still a lot more to come.

Williams Companies is now the Northwest’s largest plumbing and civil contractor. We offer a comprehensive line of quality plumbing, civil construction, HVAC, green energy, consulting, and service solutions. Our workforce is over 300-strong, and our offices can be found in Bozeman, Big Sky, Billings, and Great Falls.

It has been an incredible 40 years. We fully expect to be here for the next four decades, and we’ll do it by following a simple adage: catch people doing things right.